The between-wars modest house is a second type of single-family dwellings, built after 1918 in the Brussels Capital Region. Between 1914 and 1920, almost no housing is built in Brussels. Indeed, the First World War marks a complete halt to building. From 1920, there appear many changes both in the urban planning of Brussels and in dwelling types and styles, even if the single-­family house remains predominant. The city of Brussels expands greatly and the suburbs become much denser. Garden cities are built for workers at the edges of the city. From 1930, apartment buildings both for the working classes and for the middle classes multiply in Brussels.

Two of the main problems after the war are the reconstruc­tion of the damaged cities and the shortage of housing. Under the influence of the English Garden City Movement, preference for social housing is most often given to the construction of single-­family houses located in garden-cities, in the communes surrounding Brussels from 1900 to 1930. These garden-cities mainly have two types of worker houses: the English cottage style and the modernist, cubist and functional style. These worker houses are mainly small-size neighbouring houses, with two or three façades (sometimes four façades) according to their location. Each house has a small green space in relationship with the public space. 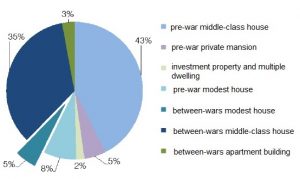 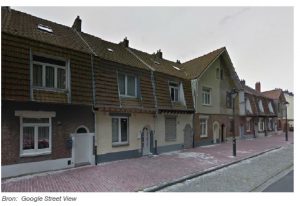 Download the explanatory sheet on the between-wars modest house (type 4b) with a historic background, a general description, information on urban situation and scale, a description of main characteristics (spatial organisation, circulation and stairs, construction system, façades and materials and equipment and technologies) and one example case. ENGLISH NEDERLANDS FRANCAIS

Back to ‘Brussels housing typologies (before 1945)’.

In the following paragraphs, a short description of the characteristics of the between-wars modest house is given.

Two of the main post-war problems are the reconstruction of the damaged cities and the shortage of housing, especially worker housing. A consensus is established and considers the garden-city concept as the best solution to the problem of worker housing. The choice of garden-cities is also economic. The construction of housing groups to the same plan with the same materials enables economies of scale and the availability of a lot of housing in a short time. The garden-city is characterised by the omnipresence of nature. The housing density is relatively low. Mostly the houses are fronted with a garden and enjoy small cultivable plots at the back.

The garden-city worker houses are located in the outskirts of the city of Brussels. They are mostly located along one or several lines of public transport. This dwelling type is located in the less dense and relatively green housing areas. It has and is surrounded by green spaces.

The garden-city worker house should be seen as a functional unit, easy to maintain, stripped of everything superfluous and where the various functions of a house coexist coherently and efficiently. This dwelling has a more spacious interior than the pre-1918 modest house. They are mainly small size adjoining houses with two, three and sometimes four façades according to their location. The grouping of several dwelling units simulates a large house. The plan of this dwelling type is conditioned by two principles: the adjustment of the floor area in relation to the number of members of the same family and the economy of resources caused by financial constraints. The plan is expressed around the family room in the front of the house, on the street side, the kitchen-laundry and services at the back, on the garden side and bedrooms upstairs or under the rafters. The entrance of the house is raised by one or two steps from the set-back grassed area. It sometimes features a small wooden canopy. The circulation areas are reduced to their simplest expression: one room connects with another without the use of a corridor.

Most of the garden-cities are built according to two architectural styles: