Two attempts were required to establish the apartment building for the Brussels lower middle classes. The first attempt took place in the 1870s following the channelling of the Senne. Some sixty apartment buildings were then built along the grand boulevards of the centre. But they prove difficult to acquire. Consequently, up to the First World War, multiple dwellings remain principally for workers and the single-family house remains the most common form of dwelling in Brussels. The second attempt to establish apartment buildings for the lower middle classes after the First World War was more successful.

After the 1929 financial crisis and the return of the middle classes to the centre of Brussels, certain developers turn to the construction of less luxury apartments intended for the lower middle classes. The accent is placed on the quality of the apartment properly speaking and on the advantages of modern techniques. The apartments are provided with all the necessary comforts. Cer­tain common equipment appears: system for routing the post, system of waste disposal, etc. Thanks to their comfortable arrangements – without being excessive – these apartments attract a wide public of buyers. This clear success is emulated and the 1930s see the realisation of a great many apartment buildings, for all the middle classes. It’s the real breakthrough for the apartment building. The standard between-wars building is located in the east and south-east communes of Brussels and mainly in the communes of Ixelles, Uccle and Boitfort, on tree-lines avenues like Avenue Churchill, Avenue Louise, Avenue de Broqueville, Avenue des Nations, Avenue de Tervueren, Boulevard Witlock and the Rond-Point de l’Etoile, near the ULB, the Etangs d’Ixelles, the Jardin du Roi and the Bois de la Cambre. These buildings generally benefit from a pleasant city situation. They are set out in alignment with the street, either direc­tly fronting the road or in a recessed area laid out as a small garden. Some buildings are also set out on the corner of housing islands.

The construction of social buildings continues after 1920 in order to meet the shortage of affordable houses, offering an alternative to the garden-city house and a solution for the highly urbanised Brussels communes. From a typological point of view the first buildings constructed relate to the social housing constructed pre-1914: spatial organi­sation, construction principles and façade materials. Over the years, the façades are developed further and some include an elevator as well as stairs and shops on the ground floor. This building type is installed in the highly urbanised communes of Brussels, aligned with existing buildings and most of the time, directly fronting the street. These modest buildings are either constructed as a complex located on a whole housing island or on one or two plots in an already built island. Some buildings are also located on island corner plots.

Based on the land registry table No. 212AM (situation at 01.01.2012), apartment buildings represent around 3% of the pre-1945 Brussels property stock and 12% of the housing (see Figure 1). Note that currently, following the numerous conversions of middle­-class houses and private mansions, 42% of the pre-1945 Brussels residential stock is constituted of multi-family dwellings. Finally, while many apartment buildings are built between the two wars, middle-class houses and private mansions continue until the Second World War to dominate the Brussels landscape. 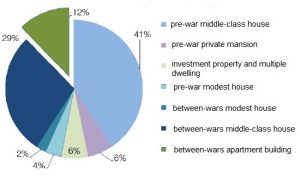 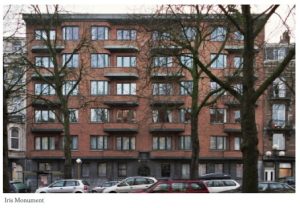 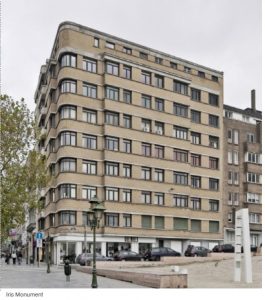 Download the explanatory sheet on the between-wars apartment building (type 6a, 6b) with a historic background, a general description, information on urban situation and scale, a description of main characteristics (spatial organisation, circulation and stairs, construction system, façades and materials and equipment and technologies) and two example cases. ENGLISH NEDERLANDS FRANCAIS

In the following paragraphs, a short description of the characteristics of the between-wars apartment building is given.

It’s in the between-wars period, helped by the socio-economic situation, that the middle and lower middle classes discover the joys of apartment living. Many apartment buildings are then constructed. They offer every modern comfort of the era. The technological advances of the inter-war period enable them to be built higher than the pre-war buildings: they reach heights of 8 to 10 stories. Investment properties of four to five floors also continue to be built. They are less luxurious than those built pre-war along the grand boulevards of the centre, while being comfortable.

The standard between-wars building is mainly located in the second crown around Brussels, mainly in the communes of Ixelles, Uccle, Boitsfort and along the grand avenues. After 1945, the apartment building is located on vast green spaces. Between the wars they are set adjoining other buildings, generally on corner plots.

Usually each floor houses two apartments. A stairwell and a lift serve the common landing between the two apartments. The apartments are characterised by a daytime space (usually facing the street) and a night-time space (inside the island) which are laid out around an entrance hall.

New construction techniques (Franki piles, metal structures, reinforced concrete, etc.) and new technologies (lifts, etc.) support the greater height of the between-wars apartment buildings. Buildings that often reach 8 to 10 stories. In general the last or even the last two floors are slightly set back from the street façade.

In order to provide its occupants with every modern comfort, each apartment is equipped with a fitted kitchen, hot water distribution, waste chute, individual gas heating, etc.