Pre-war private mansions are a second type of single-family houses, built before 1918. Originally reserved for urban dwellings located between courts and gardens, the term “hotel (mansion)” gradually designated all abodes with higher quality than the middle-class house. The main building was originally completed with annexes and stables on the court side. It features a coach passage, allowing the carriage and horses to enter the court. This housing type is installed on a usually larger land area which results from the joining of two or three plots and offers greater freedom of composition.

The pre-war private mansion is built and occupied by Brussels high society: aristocracy, major land owners, major industrialists, bankers and certain top civil servants. These mansions are built in the outskirts of Brussels, on the ring type boulevards and in certain new quarters. The sup­pression of the octroi in 1860 favoured this suburban location, to the east and south-east of the Pentagone. These mansions are big, they generally have 3 stories and more or less 5 spans in width. They are characterised by the presence of a lateral carriage entrance on the road façade, which crosses the dwelling and gives access to the outhouses and stables at the back of the plot.

Based on the land registry table No. 212AM (situation at 01.01.2012), pre-1918 private mansions represent around 5% of the Brussels pre-1945 housing stock (see Figure 1). A little more than two thirds of them have since been converted into multi-family dwellings. 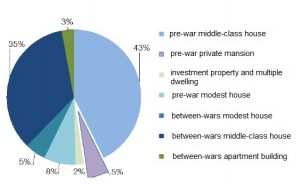 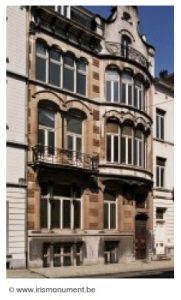 Download the explanatory sheet on the pre-war private mansion (type 3a) with a general description, information on urban situation, a description of the main characteristics (e.g. spatial organisation, circulation and stairs, construction system, façade and materials) and one example case ENGLISH NEDERLANDS FRANCAIS

In the following paragraphs, a short description of the characteristics of the pre-war private mansion is given.

This housing type is based on the same principles as the middle-class house while it is designed with greater richness of form and vaster spaces. It is characterised by a greater width of façade (>10m) and a coach entry – a deep, wide and covered passage leading to the interior court where the outhouses and stables were located.

This housing type is installed along wider avenues or boulevards like Avenue Louise or Avenue Franklin Roosevelt and also around certain squares or parks. It is installed either fronting on the street (Léopold Quarter) or set back. In this case, a small pleasure garden separates it from the public space and the street.

Like the middle-class house, it is organised around two types of living rooms: the main rooms or living rooms and the secondary rooms dedicated to the services and to circulations. The distinction between these two spaces is made according to a longitudinal division which separates the house into two distinct spans in the ratio 2/3 – 1/3. This composition is enhanced by a side vehicle passage crossing in a third span. The ground floor is raised by 60 centimetres to one metre above the street level and is enriched with a veranda or a greenhouse which leads to the garden space. The living rooms have great ceiling height, significant width (4 to 5 metres) and are mainly lit by large glazed bays. These rooms are also richly decorated and ornamented. In the middle of the coach entry, a porch leads into a large hallway which houses the start of the main stairway, often monumental and richly decorated, leading to the upper floors. This stairway is double flight with an intermediate landing. It is usually covered by a large roof lantern which lights the entire stairwell.

The street façade is strongly worked and decorated. There are many decorative elements like a glazed impost, often in a stone frame above the entrance door, one or several balconies with balcony doors and balustrade guardrails in stone or iron or cast iron grill, a bow-window on one or more levels, bays of windows of different forms and naturals stone reliefs (surround and column), oriel and dormer windows in the roof, etc. The composition of the street façades as well as the materials used evolve according to the different styles.