Pre-war modest houses are another type of single-family houses built before 1918 in the Brussels Capital Region. In the 19th century, housing for the popular classes becomes a major preoccupation of the governing classes. The middle classes attempt to prevent any social trouble by keeping these popular classes under its control. Thus housing becomes one of the lever arms of this policy. The ruling class attempts to direct modest populations by setting them a single living model, theirs.

Pre-war modest houses are simple homes that are most often built in groups by a private contractor. They appear in a line along a public street or as a cul-de-sac (the most widespread type characteristic of Brussels) or as a ­grouping around a small square or court inside the island, which makes them hard to see from the public street. Following the work of sanitation and enhancement at the end of the 19th century and the work of the North-South connection at the start of the 20th century, many houses of this type were demolished. At the end of the 19th century, modest homes are distributed in the outskirts, in small groups, in existing structures. 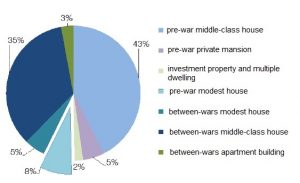 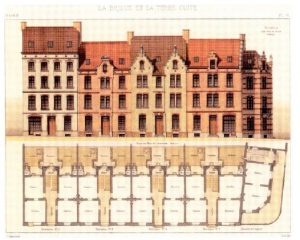 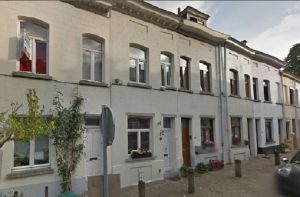 Download the explanatory sheet on the pre-war modest house (type 4a) with background information, a general description and information on urban situation and main characteristics (spatial organisation, circulation and stairs, construction system and façades and materials). ENGLISH NEDERLANDS FRANCAIS

In the following paragraphs, a short description of the characteristics of the pre-war modest house is given.

This housing type has a strictly limited plot (width around 5 metres and depth around 11 metres). It follows the middle-class model but is reduced to its simplest expression of one or two spaces in succession and relative equivalence of the longitudinal spans.

These modest houses are located in narrow streets, lanes or cul-de-sacs, either in industrial areas of the city suburbs, or in certain suburbs on the outskirts of Brussels.

The modest house has two floors: ground floor and first floor. The first floor is partly under the rafters. It is usually characterised by a depth according to the number of rooms in succession going from 5 metres to 8 metres and a height of façade not exceeding 6 metres under cornice. The ground floor is only raised by one step from the street level. The modest house is generally completed with one or two annexes in the interior court: kitchen and toilets. These annexes have only one story. Sometimes the kitchen annexe is topped with a second level with bedroom (in the extension of the main bedroom). In the case of two rooms in succession, the kitchen is integrated into the dwelling.

The street façade is reduced to its simplest expression. It is made of bare brick or rendered. It has few decorative elements: plinth, sill and sometimes bands in quarry stone, wooden window frames, etc. The ground floor window onto the street sometimes sports shutters.