Pre-war middle class houses are a first type of single-family houses, built before 1918. Originally designed as single-family houses for the Brussels middle class, middle-class houses today still constitute the life style of many families. While they have often been adapted to new living styles or subdivided into several dwelling units, many of them have kept the essential of their original design. If they initially fit a stereotyped programme, the spatial properties of the rooms enable contemporary use and arrangements. The new functions can be integrated easily into the existing volumes without questioning the original systems of distribution and spatial organisation.

Pre-war middle class houses have their origin in the wood-frame gable end houses of the 15th and 16th century. Throughout the 19th century, they undergo significant stylistic change, but nevertheless maintain a number of general characteristics. These houses have a relatively narrow façade in relation to the depth of the plots. While they are all brick built, the appearance of the fronts evolves with time, especially because of the influence first of the neo-classical style and then the eclectic and the Art Nouveau styles. This housing type is mainly found in the exten­sions of the city or in some residential quarters. Many merchant’s and middle-class houses are also located around the railway stations. These houses comprise a ground floor reserved for workshops, shops or café-bars.

Based on the land registry table No. 212AM (situation at 01.01.2012), pre-1918 middle-class houses represent around 43% of the Brussels pre-1945 housing stock. A little over half of them have since been converted into multi-family dwellings.

Around the pre-war middle-class house type, there are many variations of volume and living area that generally depend on the owner’s social status.

According to their year of construction, three types of pre-war middle-class houses were defined (see Figure 1): 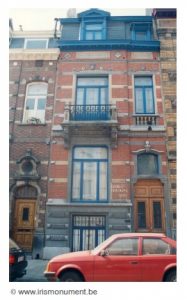 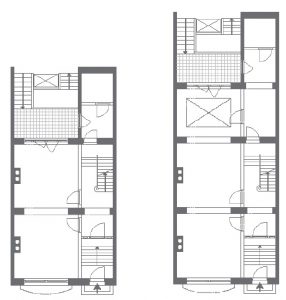 Download the explanatory sheet on the pre-war middle-class house (type 1a, 1b, 2a, 2b, 2c) with a general description, information on urban situation, a description of the main characteristics (e.g. spatial organisation, circulation and stairs, construction system, façade and materials), a description of possible variants and two example cases. ENGLISH NEDERLANDS FRANCAIS

Detailed description of each sub-type

In the following paragraphs, a short description of the characteristics of the different sub-types of pre-war middle-class houses is given.

Type 1a: Middle-class house built before 1850

The middle-class house is a town house. It is an adjoining family house with a narrow high façade, whose plan is divided into two separate spans in the ratio 2/3 – 1/3. There is a separation between living rooms and services.

Up to 1800, the first middle-class houses were mainly located in the inner-city. From 1819, these houses were also located on the promenade boulevards near the former ramparts of the second enclosure of Brussels-city.

The pre-1830 middle-class house is usually characterised by two living levels and an attic. The ground floor is raised 60 centimetres above the pavement. The house plan is expressed around a succession of two rooms (sometimes three) on the ground floor. Winding stairs or straight flight stairs give access to the upper floors, located in the secondary span. Originally, the toilets were located outside, in the interior court.

The street façade of this housing type is inspired by the wood-frame house and its gable-end. Gable-end façades are often found: stepped or corbie step gables (crow-stepped) and more ornamented gable-ends. These gable-ends gradually disappear and are replaced by a small triangular or curved pediment, sometimes decorated with a shell. The street façade is made of bricks and is divided into two or three spans. According to the occupant’s social level, the street façade is ornamented or not with decorative elements.

The middle-class house is a town house. An adjoining family house with narrow high façade and whose plan is divided into two separate spans in the ratio 2/3 – 1/3, separation between living rooms and services. The neoclassical middle-class house appears at the start of the 19th century, under the French influence and the building of certain prestigious ensembles like the Place Royale or Place Saint-Michel (now Place des Martyres), etc.

This housing type is located along the belt boulevards and new avenues, in the new inner-city quar­ters, in the first expansions of the city out of the Pentagone (Léopold Quarter) and in the rehabilitation of some quarters in the Pentagone.

The neoclassical middle-class house is usually characterised by two living levels (sometimes three levels), plus an attic and by a roof with two slopes. The ground floor is not raised above street level. The house plan is expressed around a succession of three rooms, on the ground floor, which ends with a veranda, on the garden side. The stairs leading to the upper floors is wooden and composed of two flights, thus creating and intermediate landing. Originally, the toilets and kitchens were located outside, in the interior court.

The street façade is rendered and divided into three equivalent spans with bays of the same dimensions. The façade has few decorative elements. The gable-end is replaced by a classical cornice. There are two types of street façades:

The middle-class house is a town house. It is an adjoining family house with a narrow high façade, whose plan is divided into two separate spans in the ratio 2/3 – 1/3. It has a separation between living rooms and services.

The main floor middle-class house is usually characterised by three living levels, attics and a roof with two slopes. The main floor is raised by 150/180cm above street level. The “kitchens-cellars” are located in the basement, semi-buried and lit naturally. They are also open on the ground level to a low court on the garden side. This court is lower than the garden, which is generally retained by the construction of a rain water tank. The plan is expressed around a succession of three rooms, which ends with a veranda or greenhouse (winter garden). The stairs leading to the upper floors are located in the secondary span on the garden side. They are wooden and have two flights with an intermediate landing. Arranged on the landings are interme­diate rooms, entresols, dedicated to the services.

The street façade of this housing type is individualised. This in­dividualisation is reinforced by a dash to emulate styles and decorative elements. The materials used play a dominant role in this variety. The “noble” span is marked by wider bays and has a projection of 5 to 10cm in relation to the street alignment. The two bays of this span are replaced by a single bay. There are certain distinctive decorative elements like a glazed impost above the entrance door, a balcony with balcony door on the first floor, with balustrade guardrail in stone or iron or cast iron grill, an oriel or bow-window on one or two levels, a shoe cleaning system, as a small barred niche with metal scraper, putlog holes under cornice blanked with wooden caps, etc.

Around this well-defined type, there are many variations (habitable volume and area), depending on the owner’s social status. This is why main floor middle-class houses have been classified into three size categories, according to the analysis of the stock carried out on the basis of the land registry table of 2011: 120 to 170m², 170 to 240m², 240 to 350m².