Pre-war investment properties and multiple dwellings are examples of apartment buildings built before 1918 in the Brussels Capital Region. A first of two attempts to establish the apartment building for the Brussels middle classes took place in the 1870’s following the channelling of the Senne. Some sixty apartment buildings are then built along the grand boulevards of the centre. But they prove difficult to acquire – the Brussels lower middle and middle classes consider the fact of cohabiting under the same roof as a situation of poverty and promiscuity. Consequently, up to the First World War, multiple dwellings remain principally for workers, and the single-family house remains the most common form of dwelling in Brussels.

The first apartment buildings appear from 1870, along the boulevards of the centre. These are monumental buildings, usually with shops on the ground floor. These buildings are designed on the model of the Parisian (Haussmann) type, but have simpler design and do not satisfy the comfort criteria of the middle classes. In a few years, a great many apartment buildings are put up in the Bourse Quarter, along the Boulevard Adolphe Max, the Place De Brouckère and the Boulevard Anspach. However, the construction of apartment buildings experienced a difficult and laborious start, despite the initiatives of the City and certain property developers. Indeed, for most of the Brussels population, used to the middle-class house and a vertical life between several floors, apartment life is not very attractive and cohabitation and the proximity of other inhabitants are perceived as a social step down. Then, from 1850 the middle classes initiated an exodus movement to the outskirts and new quarters of Brussels, which is why many of these buildings do not find buyers.

However, the building of apartments is not aban­doned: many investment properties and apartment buildings of more modest size are constructed. The apartment buildings have an external scale and appearance similar to the single-family house. However, they are dedicated to housing several families, which each occupy one or two rooms and share the toilets. They are most often occupied by the working classes. Their façades convey a desire to improve the image of worker housing. This housing type is often inserted between two adjoining properties and has a scale similar to middle class houses. In its more luxury versions, occupied by the middle classes, each flat of the apartment building is equipped with toilets.

The first major collective social housing projects also appear in this period: in particular, the properties of the Rue Marconi in Forest (1903), the Hellemans Cité between the Rue Haute and the Rue Blaes (1906), of the Olivier Cité (1902), and the Helmet Cité (1910) or again the Cité of the Rue Blaes (1912). The social apartments are simple and functional. They comprise a set of rooms dedicated to the kitchen, to sleeping and are equi­pped with toilets and patios.

Based on the land registry table No. 212AM (situation at 01.01.2012), pre-war investment houses and multiple dwellings represent around 2% of the pre-1945 Brussels residential stock and 6% of the dwellings (see Figure 1).

There are three types of pre-war multi-family housing in the Brussels Capital Region: 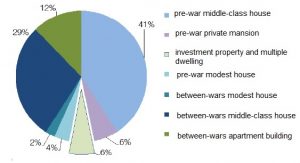 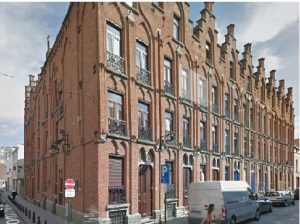 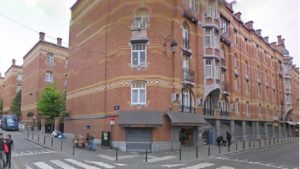 In the following paragraphs, a short description of the characteristics of the pre-war investment property and multiple dwelling is given.

Investment properties have since their construction been renovated as small apartment buildings and are more comfortable.

Investment properties are mainly located in the perimeter of the second enclosure, near to railway stations and small shops, while worker apartment buildings are mainly located in the city suburbs near to the industries. Finally, the first investment properties (intended for the middle and lower middle classes) were built along the boulevards of the centre, following the channelling of the Senne, in the 1860s. Generally they are built on corner plots because they have no gardens and are less appropriated to the construction of single-family houses.

Investment properties are occupied by several worker families. One family usually occupies one to two living rooms and shares the toilets with the other tenants of the building. While remaining excessively simple and functional, the workers apartment building is somewhat more comfortable since, in general, each dwelling is equipped with a toilet which is accessible by a terrace. The stairwell is common to several apartments. As for the middle-class investment property, its ground floor is most often occupied by shops. The first floor is a prestige apartment. The second floor, less luxurious, remains very comfortable. The third floor is a modest dwelling and the attics contain the bedrooms of servants or artists.

The investment property, built adjoining, has an exterior appearance similar to the single-family house. The worker apartment building is also relatively well integrated into the stock. Not being fitted with an elevator, its height is limited to around four stories, i.e. the height of the neighbouring buildings. The investment property is built between two adjoining ones, usually on corner plots. While less luxurious, they resemble the private mansions surrounding them. The difference in quality between floors is observable in the façade.